The 4 False Principles of Shitty RPG Debate (Plus a Bonemancer)

March 16, 2019
Hey, you there! Are you into debating, reviewing or designing games? Do you find yourself alienating everyone you talk to or engage with? Are the people who agree with you all gigantic assholes? I get it, taking a stance and defending it is fun, exhilarating even, especially in those moments where you've really humiliated and "destroyed" another person because of how "good" you are at debating. Maybe it reflects badly on you as a person in some circles, but why should you care? You won, you were correct, and at the end of the day, the truth is what matters.

Except, of course, that we aren't really talking about truth at all, but a set of assumptions that bad-faith debaters are making about what roleplaying games are, how they exist in the real world and how to evaluate them. Those assumptions can be challenged, and circumvent a lot of toxic, divisive debate. Challenging those assumption might be hard, because you've built your entire persona on them, or the people you oppose are so allegedly awful that making any sort of concession to the stuff they are doing is an approval of their awful behavior.

The following is a handy guide for people who want to spot bad-faith debate. Lo and behold:

FIRST PRINCIPLE - The Universality of Gaming

The first principle you're going to assume is that all roleplaying games are one thing, and that all roleplaying games have the same goals. To hell with "RPG" being a complex, arbitrary label for a hobby that was widely diverse in content, intent and tone from the very beginning, everyone who sits down at the table is there for one reason and to experience one thing. Didn't you know? RPG's are not a human invention, but a law of nature, to be discovered by humans using science.

What follows from this principle is....

SECOND PRINCIPLE - The Universality of Approach

If all RPG's have the same goals, and all roleplayers want the same thing, then there is an optimal way to reach that goal. Just like we can measure the exact temperature at which a liquid will boil, we can figure out the optimal way to reach whatever we've decided the objective goal of all roleplaying games are. Mechanics or systems that don't serve the ultimate goal of roleplaying games are thus to be denigrated and ignored, to be discarded completely in service of better mechanics. Nevermind the silly idea that a game with a different goal might use a different mechanic to serve a different purpose - we cannot judge a game based on it's own merits, but MY MERITS, damnit!

As we can see from the first two principles, they make the assumption that people can only have fun with their friends in one specific way. This leads into the final two...

THIRD PRINCIPLE - The Deceitfulness of Detractors

People who claim to have fun using other systems for other reasons than I do are either lying to me, or deluding themselves. They might think they are having fun, but are really ignorant of the fun that they could be having, were they only to come to same realizations that I have. Not only are they wrong, they are doing the world a disservice by spreading their unholy gospel to others. They must be punished for their ignorance!

Of course, all of this sounds rather selfish, and like all selfishness, it leads to sadness. Let us plunge into the darkness with the last principle...

FOURTH PRINCIPLE - The Loneliness of the Roleplayer

For all the above listed reasons, the Roleplayer will have concluded the following: my idea of fun is the only type of fun I can enjoy. I am incurious, dismissive and will not engage. If I am invited to connect and play with people who do not sign up for my own personal, narrow, arbitrary view of fun, I will decline. Even if I am curious about the people who disagree with me, or think a game looks interesting, I will deny myself a new experience if it doesn't align with my previous experiences. If I do play other games with other people, and if I do find myself having had fun, then I have betrayed myself and my own principles. Maybe I'm bitter, lonely and toxic, but at least I am correct....

Now does anybody hold these actual opinions outright? Obviously not. But they are the underlying assumptions of most toxic online arguments, even in things that aren't roleplaying games. People don't consciously choose to make these assumptions and follow these principles, but they tend to do so because these principles give their arguments value that they wouldn't have had otherwise.

This doesn't mean that critiques of mechanics and conceptions cannot exist. There are obviously shitty roleplaying games with bad mechanics and problematic themes. But roleplaying games don't exist in books or in calculators, but at the table, and every table is unique, and every table hacks and homebrews, even if not explicitly. It's value is determined at the table, not against some abstract virtue. I am calling for open-mindedness, not uncritical acceptance of every RPG product out there.

I try and judge games based on the implied or explicit purpose of the game, on it's own merit. If I don't get the appeal of a game, I try to find people who do, and ask them what that appeal is. I don't have to find that personally appealing, but at least I understand something new about other people, which has value unto itself.

Honoring the social contract toward Joesky, I hereby present THE BONEMANCER! CW for body horror for those who don't want that sort of stuff! 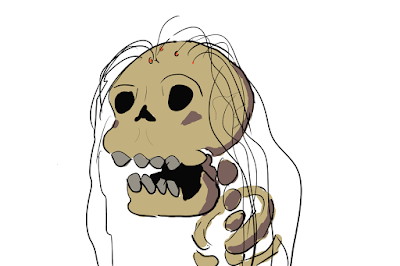 The Bonemancer is a HD 2-5 creature capable of manipulating bone and fossil. They can make the bones of any creature, living or dead, move independently. It looks undead, but is actually a living elemental force that uses bones to form itself into constructs. It is therefore immune to Turn Undead. Many Bonemancers look like human or animal skeletons, but others are random collections of bone without rhyme or reason.

The HD of the Bonemancer is determined by the amount of bones it is able to bind to its spirit. Roll 1d8 (adjust HD updward if you wish to challenge players more):

(For reference, there are 206 bones in the human body)

Throw Bones: The Bonemancer can use any loose bone or dead limb in its surrounding as a ranged attack against any player. DEX to avoid.
Bone Smash: One of the bones of the bonemancer is used as a blunt weapon. STR to avoid.
Bone Theft: (This is the body horror one) If  HD 4 or over, Bonemancer can attempt to rip one of the PC's bones out of their body to add to their own collection. They can attempt to resist this with CON or CHA, or take other actions to prevent skin piercing and the bone joining the Bonemancers collection.

The Bonemancer has one goal - find more bones and add them to its collection. That is why it is often found at graveyards, tombs or the feeding grounds of predators. They will only actively attempt to steal the bones of the living if deprived of other sources or to take revenge against others. If PC's offer them bones, they can often pass without harm. Many cultures see the Bonemancer as a parasite, others welcome the Bonemancer as a way to dispose of excess skeletons.

Popular posts from this blog

February 17, 2019
A Swamp Thing inspired character class for Rad-Hack https://www.instagram.com/godnattmalin Bayou Entities are non-human creatures created when powerful alien swamp radiation transfers the dying consciousness of a human unto the vegetation that surrounds them. They rise out of Rad-Swamps that have become the burial ground for unfortunate humans, false ghosts roaming the swamps. They are made entirely out of plant material, their organs serving no real purpose. Often confused about what they have become. Player characters that die in Swamps can return as a Bayou Entity . At the start of 15 minutes of play, they must roll a WIS check to combat the feeling of unease that this traumatic transformation has wrought. 3 successive failures will lead the plant body to reject its consciousness, 3 successive successes will lead to the plant body accepting it. You can roll-up the Bayou Entity using the guidelines for Human characters in Rad-Hack , or you can transfer the stat of a pre
Post a Comment
Read more

November 17, 2019
Recently, I've been questioning the primacy of "Design" within RPG products. There's a kind of determinism that is generally accepted among RPG folks that Design determines what Play looks like. Listening to some versions of what Game Design is, you'd get the sense that the job of a designer is to manipulate and mind-control the people who play it, and perhaps to teach lessons about some things. If they are correct, and game design truly is a form of Vault-Tec style behavioral control, we might have to ask ourselves if this is even desirable? I don't doubt that design to a certain extent shapes the behavioral patterns and the choices role-players make, but I find that designers more often than not overrate their own presence at the table in a rather self-aggrandizing way. There is a famous, perhaps dubious sentiment surrounding Vampire The Masquerade - that the games mechanics seemed so contrary to the intended playstyle of the game that it is a wonder a
1 comment
Read more

THE SKØVD CHRONICLES are live!

February 14, 2020
My contribution to ZineQuest, "The Skøvd Chronicles" is now..... ...... LIVE ON KICKSTARTER  https://www.kickstarter.com/projects/skovd/the-skvd-chronicles-1-weird-gothic-city-crawl-zine/description
Post a Comment
Read more