What do you do when you've awoken at 3 am on a workday and can't sleep? Design an RPG of course!

This Monday I did a bad job of trying to adjust my sleep-schedule, leading to hours with nothing planned and no-one in my timezone to chat with.

I decided to try designing a character sheet for a simple DND-clone, this time in Swedish. My handwriting is horrid and I can't draw a straight line, so the aesthetics and readability are terrible.

I spent most of Wednesday creating a sort of clean version in InDesign: 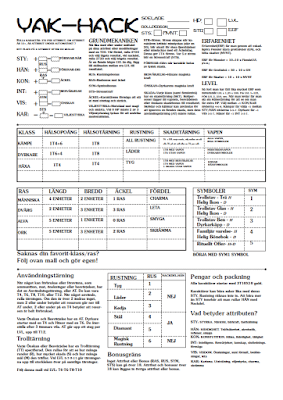 What follows here is a collection of random design ideas and working assumptions I had making it, and how I'll go forward. This text will probably end up being longer than the actual rules of the game, by God!


Essentially it has the player-facing roll-under system I most associate with the excellent Black Hack with some clear differences. The advantage of player facing roll-under systems for OSR-style games is that it removes a lot of the cognitive load from the Referee to keep track of Difficulty Classes and the like. Outside of Combat, using DC for task resolution tends to lead to situation where the Referee decides what is a problem and how the players ought to approach it. It is good to keep a set of solutions in mind, but I don't want a game where I tell the players how they are "supposed" to act. That is the players job!

It also tells the player that their success or failure is on them, as they cannot point to a Referee making up unrealistic numbers, and thus inspires a more careful approach.

The basic motto of the game is "Featherlight Rules, Hardcore Dungeon Crawling". That means having a system that is easy to adapt and understand, while also enabling the kind of interactive, challenging, and hilariously blunt kind of play I love my dungeon crawls to have.


In terms of layout, I took a bit of inspiration from Mothership, where the layout of the Character sheet also served as both a character creation and summarized some of the rules. I managed to get most of the rules on one page! I'll have to put Equipment, Incantations and Wishes on a seperate page, as well as some basic info for the Referee. Maybe I'll include a one-page dungeon if I do a digital release?


For armor, I decided that wearing armor would give a bonus, increasing both the Strength (Styrka) and Dexterity (Händighet) scores when defending. So cloth armor gives + 1, leather + 2 etc. For Steel and Diamond armor I decided that it will give a disadvantage on Dexterity, even as the armor bonus is higher. Then I thought of having Magic Armor, probably an Inacantation, that has a high armor bonus and no disadvantage on Dexterity. It is basically there to protect the poor Witch, who can get only 1 total HP and can only wear Cloth armor.

I decided against using the generalized Armor Dice system from Black Hack 2nd Ed., because I felt it was kind of un-initiative. I kept it for the "extra" armor like helmets and shields though, since I feel it could be easier to communicate. The armor you're wearing is a constant bonus to defense, while shields and helmets can be used strategically to avoid damage.


While we are still talking classes, there are 3 basic ones: Fighter (Kämpe), Devotee (Dyrkare) and Witch (Häxa).

Figther is an amalgamation of the non-magic classes (Ranger, Barbarian, Figther etc) and does the obvious fighter type stuff, having the choice of both melee and ranged as well as all armor. I skipped the Thief class because I want all the characters to be roguish, sneaky and creepy.

The Devotee is the Paladin/Cleric class. I chose Devotee instead of Cleric or Priest because I want to communicate that this ain't an authoritarian analogue for Christianity, and much more of a low level fanatic creep. I am thinking of renaming them to Cultists (Kultister) instead, communicating the kind of Darkest Dungeon-esque creepfactor I'm looking for. They cast "Wishes", which is more desperate sounding than Prayers.

The Witch is basically the standard sorcerer/wizard class, but with a Dark Magic twist, their spells called Incantations. Again, I'm trying to avoid the sort of Gandalf/Merlin type Noble Wizard, and I'm trying to communicate that the Witch is probably more of a weirdo outcast. Not evil! But rejected by society. All these characters are supposed to be the kind of social rejects that are comfortable spending their nights risking life and limb in stinky dungeons just to get even.

Most of this stuff isn't written out, which is why the class names are so important to communicating tone. I had to fit all the relevant class info on one page, and wound up with this:

I left a blank row for people to add their own Class if they wanted to create one, which shouldn't be hard.


I did a similar thing with the Races:

More on what that means later. The point is I wanted the player to be able to underline the Class/Race on the sheet and have everything you need right there. What is neat about this is that anyone who wants to hack it can get the gist of it pretty easily.

For Races, I went with Human, Dwarf, Elf and Orc. The first way their distinct is their height and weight, measured in abstract "units". You dont need to know metric or imperial, just understand their relative sizes. The races also get Advantage on certain actions, Humans get Charm, Dwarves get Search, Elves get Sneaking and Orcs get Intimidate.

Adding to the "Gross" theme of the game, I added a save called "Disgust" (Äckel). You add your race "Disgust Bonus" to their Constitution to get the "Disgust Save". This is basically a stand-in for a Fear Save, but not as narratively loaded. Basically, whenever something looks, feels, smells sounds or tastes terrible, roll under your Digust Score. On a failure, roll 1D4 and add it to your Stress.


Stress is a 1d4-determined number that is gained when a Disgust Save is failed, a player rolls a critical fail on any roll, or is subjected to a spell that specifies stress. Every 5th stress becomes 1 Stress Penalty, making it harder to succeed on Willpower Saves. So 5 Stress is -1, 10 stress is -2, 15 stress is -3, etc.

Willpower Saves are rolled whenever a character is subjected to a Wish or Incantations, and when resisting unconsciousness when 0 HP are reached. A Willpower Save is essentially like Death Saves in 5E, the player having to succeed with 2 out of 3 saves.

This might be a clunky system, but I had the idea of giving spellcasters bonuses based on what kind of Magical Symbol they use (Wand, Holy Icon, Familiar, Religious text, etc.) It lends a certain weight to finding and getting a better Symbol, same as learning spells by seeking them out in the world. 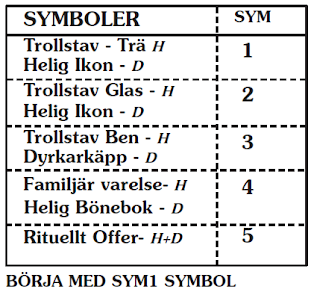 I haven't written it down, but I did decide that there wasn't going to be any level based spells, instead opting to change the spells dice efficiency by level. This might become a problem for convertibility, but I like the fundamental idea. The dice efficiency of the spell determines damage, AOE and duration, which I think is pretty cool. One possible problem is that it currently has the same UD as Black Hack, so that would mean 1. Rolling for casting the spell 2. Rolling the dice efficiency to see damage, AOE and/or duration 3. Rolling a UD to see if you forget the spell. That's a bit too much rolling, but I don't think it is a huge problem.

The main challenge of this game isn't really mechanics, it is the presentation. Even as I like how it turned out, the text is hard to read when zoomed to 100% in my PDF-reader. I'm going to see if I can fix that, or if I'll have to cut stuff. I hope not!

The struggle is going to be putting together the lists of Incantations/Wishes. Not that I think it'll be mechanically different, but lists of Stuff is not my strong point. I want the spell stuff to feel fun and not be the same type of magic-missile stuff that everyone is familiar with, but I want to communicate what the spells are pretty easily. Same with the equipment list - I'm thinking of excluding swords and just allowing Javelins, Mazes, Axes and the like for melee, just for the heck of it. Probably some fun stuff for Ranged Weapons, too. And how am I going to fit the starting equipment on a page? Maybe they'll have to buy all their equipment.

Lastly, a Referee page. Just a list of proceedures, an explanation of the HD system, etc. How to run an adventure, explaining dungeon turns and iniative, the general stuff.

What has been most fun about this is that of all my projects, this one just sort of came together and I didn't have to do a lot of mental gymnastics to know what I needed. I look forward to working on it more - perhaps even making an Enligsh version!
If you know Swedish and want to check out the WIP game - here it is.


Bayou Entities are non-human creatures created when powerful alien swamp radiation transfers the dying consciousness of a human unto the vegetation that surrounds them. They rise out of Rad-Swamps that have become the burial ground for unfortunate humans, false ghosts roaming the swamps. They are made entirely out of plant material, their organs serving no real purpose. Often confused about what they have become.

Player characters that die in Swamps can return as a Bayou Entity. At the start of 15 minutes of play, they must roll a WIS check to combat the feeling of unease that this traumatic transformation has wrought. 3 successive failures will lead the plant body to reject its consciousness, 3 successive successes will lead to the plant body accepting it.

You can roll-up the Bayou Entity using the guidelines for Human characters in Rad-Hack, or you can transfer the stat of a previous character that you're resurrecting.

HP Per Level/Resting: 1d8
Radiation Die: d6
Weapons and Armour: No Ranged and all Melee. Biological bark armor with 4 armor points, proficient in no other armor.
Attack damage: 1d10 if armed, 1d8 if unarmed or improvising.

Bayou Entities start the game with 2 randomly selected Green Powers and an ability die of 1d4. To use these, first test the attribute that corresponds with what you are attempting to do, then roll the Ability Die to check if it decreases a step. Reactive Green Powers (R) can be triggered even when it isn’t the targeted player’s turn, and counts as a free action. Players are encouraged to be creative with how they use their Green Powers by making them stronger, altering their effects, etc. Depending on the power of the effect, such tests can be at a Disadvantage. If a roll of 20 is made while using a Green Power, the lose themselves in the Green, turn to a Vegetative State and cannot act for 1d4 turns.

Biorevive: The character can resist death as long as there is biological plant matter close to their dying body. The consciousness can be transferred unto that plant matter and the creature becomes fully formed during a long rest.
Flamable object: Disadvantage on resisting fire damage.

Roll to see if attributes increase. Roll 1d6 to determine what attribute to roll twice for.
Increase the Ability Die one step on even levels. Gain a random Green Power on uneven levels, to
a max of five. When gaining a sixth Green Power, that one replaces an old one.


Rad-Hack is created by Karl Stjernberg, and can be found in physical form here as well as in digital form at drivethrurpg.