THE SKØVD CHRONICLES are live!

My contribution to ZineQuest, "The Skøvd Chronicles" is now..... 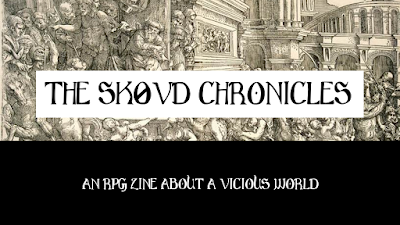 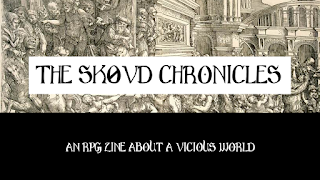 THE TIME HAS COME. BEGIN FOLLOWING THE ZINEQUEST "THE SKØVD CHRONICLES" ON KICKSTARTER. WE LAUNCH FEBRUARY 14TH.

you can use dnd to play anything

for reasons yet unknown, I will not capitalize the first letter in any of these sentences, unless I want to. calm down. have a snack. call a friend.

then you've probably heard some version of the following:


you don't HAVE to play dnd. there are OTHER games, that do what you want BETTER.

they're not really wrong. there isn't a sentiment there that we can make any normative claim against.

so what's the problem?

it follows a narrative we've discussed previously - the design centric perspective. It's follies are as follows:

1. it gives us a value judgement that tells us that specifically curated, "optimized" experiences, that carries with it the intentions of its authors, are superior to those that are discovered or carved out

2. it posits that "dnd" as a game should be confined to its commodity form - i.e that we should only interpret "dnd" as an intellectual property (Dungeon's and Dragon's 5th Edition) created and sold by a capitalist institution (Wizards of the Coast) who have the final say on what that product is.

the first one is of course, something we are allowed to disagree with (and we shall). that it is presented as a fact and not an opinion is another issue. it rubs me the wrong way, and reminds me of toothpaste commercials.

it contends that "dnd" is a game about killing goblins for money at first, and eventually killing level 50th evil lich-kings for glory at last, which, as played, all around the world, it isn't.

is it what we want the game to be? maybe, but that is irrelevant.

is it what the game tells us to do? maybe, but that is irrelevant.

it is irrelevant because that is not how dnd is played and experienced.

it is literally IMPOSSIBLE to play not just dnd, but any roleplaying game "as intended", lest it has completely destroyed your capacity to imagine and tell stories independent of it. a dnd table doesn't have to "break" any rule in the PH or DMG to have a completely different experience than what any singular individual intended.

we play lower-case dnd. the uniquely transformative, live, decommodifiying act of playing a roleplaying game makes it ours, and not the property WOTC, i.e "Upper-Case DND".

the people insisting that Upper-Case DND should define what the act of playing dnd means and does are giving WOTC a power they don't have, and shouldn't have. the irony is that they do this in an attempt of robbing Upper-Case DND of that very same power.

the central reason to play this "lower-case dnd" is that it is a language familiar to most, and is thus more accessible. it also, importantly, lacks a core. it simulates, morphs and modulates based on the situation it faces. the very fact that there are so many different editions, hacks and homebrews also means that no single mechanic in any single book is "more" dnd than any else.

the fact that dnd also isn't "optimized" for any specific scenario means that you can take the fiction where it feels like it needs to go. if we find an aspect of the fiction that our Optimized Genre Narrrative Arc Random Screenplay Generator doesn't want to support, we cant go there.

with lower-case dnd, you can go there. maybe it won't represent every emotional high or low, or reward drama or tension, but it doesn't *need* to. that's why *you* are there. heroism means resisting your programming (in this case, 6 stats, hp and a d20).

and this makes dnd uniquely hackable, adaptable and modular. it means you can use dnd to play ANYTHING.

you can probably also use shadowrun to run anything, but i dont think people are ready for that idea just yet.
Upplagd av Yakov kl. 09:36 1 kommentar: