Exciting times! I'm actually finishing up on a lot of projects and I am making great progress in general. I've decided to make a big move:

Wolf-Eel Games is going to be my own self-publishing vehicle. It's going to have a bunch of stuff that I've discussed here and on Twitter.

You can find us at https://wolf-eel-games.itch.io and Patreon.

ANNOUNCING: THE DINING DEN OF THE FUZZ-MONSTER 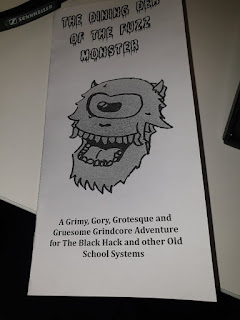 The Dining Den of the Fuzz Monster is a submission to the great itch.io "Pamphlet Jam" created by Nate Treme. It is a grotesque adventure inspired by the dark humor of Mervin Peake's "Gormenghast" and the terror of "Texas Chainsaw Massacre", with a fun and scary monster at it's core. It is based on The Black Hack (duh) and can be used as a pick-up-and-play, dropped in an already existing setting, or as a part of the setting of Skøvd.....

I've long had a Patreon - and it's starting back up again! All pamphlets and similar endevours will be available there for $1 a month! I'm currently working on more expansions on the pamphlet format. Find them there before it's released anywhere else! 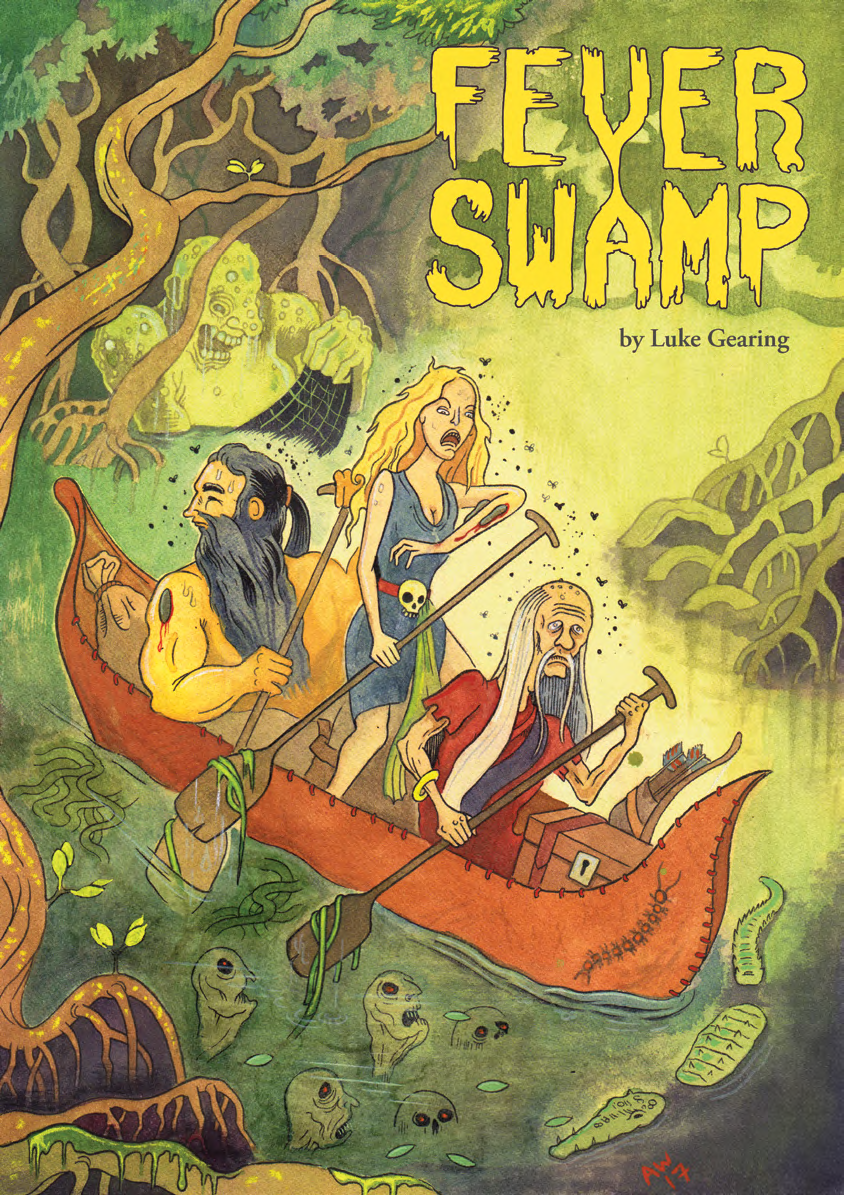 Jonas as the Cleric "Bohumil Storáková"

I trust that if you are going to play this module, you won't read further. If you like knowing all the secrets and pointing out a bunch of meta-stuff at the table is fine with your group, alright. Personally, I think Deadpooling it isn't all that rewarding.

Upon arrival in the Village of Clink, the players had already heard of the bounty regarding Gert Von Hammer and his research. I also introduced them to the creepy Jasmine - the cult-leader for the water-dead god. I loved the cult, even if I didn't get to play with it (or the Village of Clink in general) during play. It follows my general rule that if there is a cult, they ought to be wrong about what they are doing, not just their methods. Too often, the abusive propaganda of cults are treated like secret knowledge - in Fever Swamp:

"The God is real, but lies far below the ocean, not in this stinking swamp."


To the end, the players believed that the Water-Dead God was in the Ur-Corpse temple, or somewhere else in the swamp.

So they ventured out, dealing with various happenings and encounters. It all ran pretty smooth - awarding XP for Exploration was a good incentive to keep going. It did, however, powerlevel the fuck out of them! Which was good for them, but I had to reroute it to the XP-per-POI after they hit level 4, as it was going way too fast.

I had hidden some of the tribal encounters around the map, which were all memorable, and an oppurtunity for me to give out Cleric spells. During play, they got an odd Shaman Apprentice named Siiri by their side, which I gather was a party favorite, as she was easily the most useful NPC for them.


But the best part was most definitely the Ur-Corpse Ruins. They ventured in, were careful, all of that - except for when they got to the searing light. Bohumil got separated from the others and had taken a lot of damage. Standing alone infront of the Ur-Corpse, he did the only thing he knew to do - steal the god damn Corpse Fragment. Of course the checks to do it carefully failed, and so Bohumil became responsible for the apocalypse. Oh, and all his bones broke.

When the Ur-Corpse horrifying visage raised all dead around it to consume the living, the party was surrounded by the evil undead, and the world was doomed. It was then Bohumil was rocked out of his unconsciousness with the help of a nice slap on the face. He then realized the fragment he stole could be used to grant life to one dead thing. An ironic end to the campaign.

Part 2: A Review and some Lessons

This module rules. It appeals to me specifically, and itches literally every aesthetic itch I have. There are some things which carry the potential for problematic play, as discussed in the first blog-post, but I think that is firmly up to the GM and the Table to manage. There is so much of this book that is unique and worthwhile. The art is so great and evocative - it is beautiful but ugly at the same time.

Running it was very easy, and my players felt motivated to push forward - there was always something happening and always something pushing the players forward. It had a brilliant "just another hex before we stop" feeling.

What I love particularly is how it leaves so much unexplained - what the fuck are the Stilt-Walkers about, why do they hang around these cursed places? What is the monolith? Some might find that frustrating, but I find it brilliant. Most of these truths aren't available for the players, so why should it be for the GM. There is a an immense sense of implied world-building where your brain starts filling in blanks.

Above all it is the mood of the module that stands out. You fill kind of slimy and afraid even GM:ing it. I love stories and games where the characters go through a kind of nihlistic, negative character development, where they face off with things so life-alteringly grim and shocking that they are irreversibly changed. Annihilation, Aguirre and The VVitch all come to mind. Even as my players won all battles, they didn't become glorious heroes known throughout the lands, but scared and broken travelers. That's not a happy place, but it is a good place. What I guess I'm saying is - play this module if you like scary, gross, sorta funny and character-life-altering stuff.

My only real criticisms: Stilt-Walkers are great, weird and sort of scary characters. They were fun to play around with, but there are way too many of them. They're in most significant hexes, are in the random encounter table, and the fact that 18 of them can appear at once makes it feel sorta samey after a while. Initially, I enjoyed the frantic and overwhelming nature of my players squaring off against such a weird opponent, but after a while, it felt like both me and the players just wanted to avoid them. I get that it is probably there because those hexes have a mysterious nature to them, but I'd scale down the number of Stilt-Walkers appearing, and maybe replace them or create variations of them somehow in many of the hexes.

It is also quite difficult to envision the physical space in hexes that weren't keyed or described. I had to do a lot of breaks for quick map-making in order for me to make a gameable fictional space for the players. That is probably not something I can fault the design for, though, as it would be kind of difficult to include that stuff everywhere.

With regards to The Black Hack, it worked beautifully (there's a reason everything I write is written with Black Hack in mind), but the lack of comprehensive NPC rules (to the extent that I felt they were needed) meant I had to improvise and houserule. I have some problems with the GM just making up NPC actions/reactions by fiat, especially when it comes to combat, but I still wanted their companions to feel fairly exposed. Flipping a coin for that stuff is fun, but limiting. Some GM's might find the lack of rules for that stuff fun, though.

This module taught me quite a bit about both design and GMing. Here's some of them:

Luke Gearing has made a setting that is so tailored to my specific interests that it is almost frightening. Did you make this for me, Luke?

This was one of my favorite gaming experiences in long, long while. I'm probably going to run it again, some day.
You can buy it here. Please do.
Upplagd av Yakov kl. 01:22 Inga kommentarer: